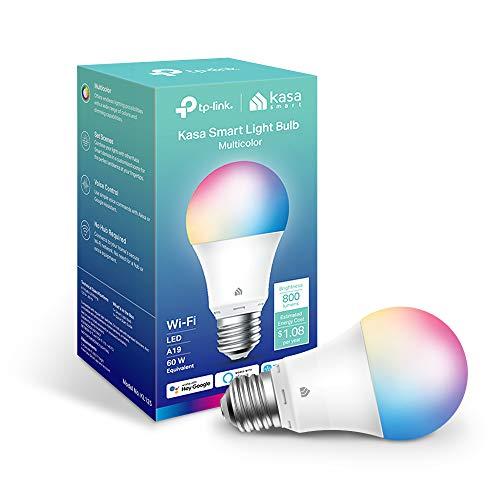 Easy to set up and packed with better-than-expected features, Kasa’s KL400L5 light strip is a great bargain for budget-minded smart home users.

It’s a bit flimsy and it can’t shine in multiple colors at once, but TP-Link’s Kasa Smart Light Strip KL400L5 packs plenty of features for the price.

This $25 light strip lacks the protective coating of pricier models, and it can only glow in one color at a time, but the KL400L5 boasts a relatively easy setup process–aside from its clunky Wi-Fi configuration, that is. It comes with a sleek app that lets you designate presets, create scenes and automations, tinker with lighting animations, and group the strip with other smart lights. It also plays nice with Alexa, Google Assistant, and Samsung SmartThings.

Similar to other budget LED light strips I’ve tested, the Kasa Smart Light Strip KL400L5 arrives on a reel sealed inside a plastic bag. Only about 1.6mm thick, the strip feels quite delicate, and unlike pricier light strips, the indoor-only KL400L5 lacks a protective coating, leaving the LEDs more or less exposed to the elements. In contrast, Kasa’s water-resistant KL420 light strip has a polyurethane coating. 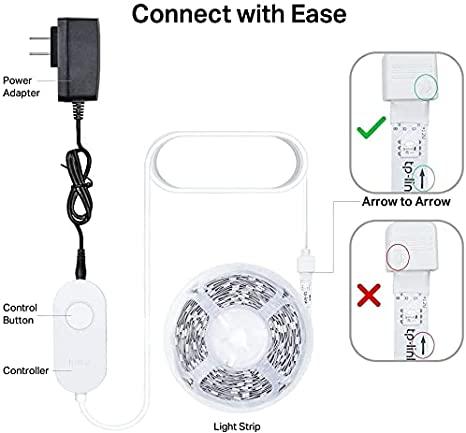 A four-pin connector on one end of the Kasa Smart Light Strip KL400L5 attaches to a 43-inch cord with a one-button controller (you press the button once to turn the strip on and off, or press and hold to switch lighting presets). The controller, in turn, has a plug that connects to a roughly five-foot power cord terminating in a thin but chunky AC adapter. The good news about the power adapter is that it has a right-angle design, which makes it a better neighbor when it comes to wall outlets and power strips.

The Smart Light Strip KL400L5 can glow in up to 16 million colors, but only in one color at a time. Again, you’ll need to pony up for Kasa’s pricier light strips to see different colors at once; the KL420, for example, has 50 discrete color zones, although at $40 it’s considerably more expensive. Wyze’s multicolor Light Strip Pro is more competitively priced ($28 for a 16.4-foot strip), but as of this writing it’s unavailable through retail channels.

Kasa didn’t offer details on the KL400L5’s lumens. In my testing, I didn’t find it bright enough to illuminate an entire room, but it should be fine for lighting up a counter or a staircase. I used it as a backlight for a bedroom dresser, and I thought it looked pretty snazzy.

Like TP-Link’s other Kasa Smart products, the Smart Light Strip KL400L5 connects directly to Wi-Fi networks (2.4GHz only) and doesn’t require a hub.

As with most other smart LED light strips, the KL400L5 has a peel-and-stick backing; basically, you just peel off the thin protective film and stick the strip firmly to a flat surface. You can cut the 16.4-inch strip to fit, but only along one of the designated cutting areas, each of which is about four inches apart. If you cut anywhere else along the strip, you run the risk of permanently damaging it.

While the KL400L5 strip can be cut, it can’t be extended (Kasa does offer extensions for its KL430 light strip). Likewise, you can’t reuse snipped-off portions of the light strip (as is possible with the Philips Hue Lightstrip Plus). That said, you can group multiple KL400L5 light strips together using the Kasa app, as I’ll describe in a moment.

To connect the KL400L5 to Wi-Fi, you’ll need to install the Kasa Smart app, create an account (if you haven’t already done so), tap Add Device, then navigate your way to the correct product (it would be great if the app could simply detect the light that was ready to pair). After a few more steps, you’ll need to connect to the light strip’s local Wi-Fi network, select your home network, enter your Wi-Fi password, and then cross your fingers. In my case, the Wi-Fi setup worked on the first try, which is a refreshing change from the norm. Still, having to connect to the light’s local network is a cumbersome process.

The Kasa Smart app lets you group the KL400L5 with other Kasa Smart lights, including light strips, allowing you to control all the lights in a given room (or even throughout your home) at once. If you’re frustrated by the inability to connect a pair of KL400L5 light strips together, simply grouping them with the Kasa app could be the solution.

Once you tap on the light strip’s icon in the app, you get a sleek if sometimes confusing six-tabbed interface. Three tabs at the bottom of the screen let you adjust the light strip’s power status, brightness, and color, using a series of attractive buttons, sliders, and color temperature wheels. Three more tabs beneath the initial trio let you view lighting effects, schedules, and power consumption.

At the top of the screen are five little dots that serve as presets; just tap an empty preset to assign the current color and brightness, then tap it again to activate, or tap the little “x” next to the dot to clear out its settings. It’s a simple, elegant solution; even better, the presets appear in the Kasa Smart’s scheduling interface for easy access.

Speaking of scheduling, you can tap the Schedule tab to put the light strip on a daily or weekly schedule. Sunrise and sunset options are available, and as I just noted, your schedules can trigger any of the presets that you’ve previously created. That said, there is no randomized vacation mode, nor can you set the strip to ramp up its brightness at a designated time.

Meanwhile, the Effects tab lets you enable one of 14 animated color effects, from “Aurora” and “Bubbling Cauldron” to “Lighting” and “Raindrop.” You can also create your own animations based on one of the pre-made effects, or you can pick a preset or a color swatch. The animations range from soothing to goofy, but they work as advertised. Even better, you can add them as presets, meaning they can be scheduled or triggered by scenes.

And yes, that brings us to the Kasa Smart apps’ smart scenes, which can be accessed via the Scenes tab on the main Kasa Smart interface. You can create scenes that activate presets for individual lights or light groups, and you can set up triggers for those scenes from the Smart Actions tab. For example, a scene could be triggered by motion alerts from a Kasa Smart camera, by the flick of a Kasa Smart light switch or dimmer, or according to a schedule.

Finally, the Usage tab gives you details on the light strip’s power consumption (in kilowatt hours) over a daily, weekly, or monthly period. It also tells you how much power you’ve saved versus a standard 60-watt bulb. Nice, but the tab won’t compute the light strip’s annual cost.

One missing feature compared to other smart light strips is the ability to sync the LEDs with your music. TP-Link previously said the feature would be coming “later” in 2021, but apparently it’s running late. I’ve reached out to the manufacturer for more details.

The Kasa Smart Light Strip KL400L5 works with Alexa, Google Assistant, and Samsung SmartThings, and I had no trouble getting the strip set up in each ecosystem. Once you’ve added the KL400L5 to Alexa or Google Assistant, you can control it with voice commands (“Alexa, set the light strip to blue”) or include it in smart routines.

I was especially pleased that both Alexa and Google Assistant recognize Kasa Smart scenes, which means you can trigger any of those nifty light-strip effects that you’ve added to a scene. Some competing light strips (Wyze’s come to mind) don’t offer scene access via Alexa or Google Assistant, which means you’re restricted to the standard color swatches when using voice commands or smart routines.

Easy to set up and packed with better-than-expected features, TP-Link’s Kasa Smart KL400L5 light strip is a great bargain for budget-minded smart home users. While I wish its Wi-Fi setup process was a little more seamless, the KL400L5 has a great app, simple presets, plenty of animations, easy scheduling and automations, and solid smart home integrations. No, you can’t extend it, and it won’t shine in multiple colors at once, but the KL400L5 still punches above its weight considering the price.