Is your cell phone powered by child labor?

Is your cell phone powered by child labor? 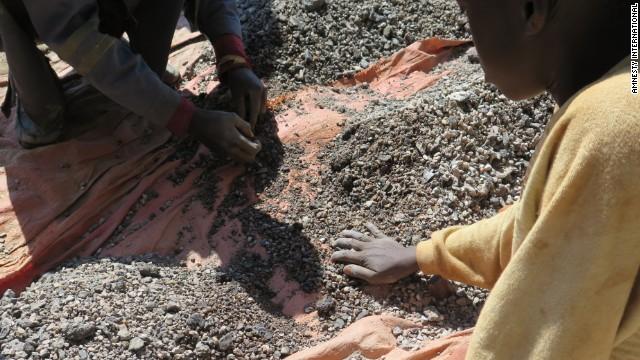 The abundance of electronics and gadgets makes it easy to forget what it takes to bring them to market. The manufacturing process begins with mining essential elements and is far less beautiful than anything we unwrap and use.

Major tech companies could be buying electronic components made from minerals mined by children, according to a report from Amnesty International that was published Monday.

Researchers of the report found that dozens of firms, including Apple (AAPL), Microsoft (MSFT), and Samsung, may have links to at least one company which sources its cobalt supply to "artisanal" or subsistence mines in the Democratic Republic of Congo.

Cobalt is a key element used in lithium-ion batteries. Most consumer devices -- from smartphones and laptops, to self-balancing scooters and Tesla's home battery -- use this kind of power source. The DRC supplies much of the world's cobalt.

"We found that traders are buying cobalt without asking questions about how and where it was mined," Emmanuel Umpula said in a statement on Monday. Umpula is executive director of African Resources Watch, an NGO that worked with Amnesty International on the report.

In April and May 2015, investigators from the two groups interviewed 87 people, including 17 children, who work or have worked in five artisanal mines.

They found children as young as 7 collecting, sorting and cleaning mineral ores for 10 to 24 hours straight. In the process, they expose themselves to particles that can lead to lung-related illnesses, and risk getting beaten or exploited financially.

"There is lots of dust, it is very easy to catch colds, and we hurt all over," a 15-year-old named Dany told researchers.

"I sold to [merchants] who have scales. But some of the others did not have scales and just estimated the weight and were not fair...they paid us less than they paid the adults," said Loïc, who was 13 at the time.

A 2014 estimate by UNICEF put the number of children working in southern DRC mines at about 40,000. 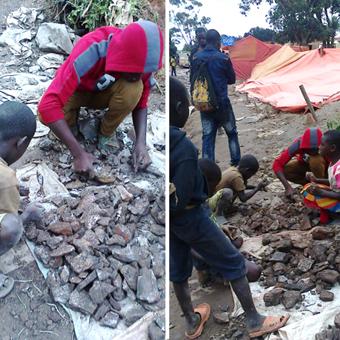 Children who work in cobalt mines make between $1 and $2 a day, according to the report. They spend their earnings on food or school because their parents don't have enough money to support them.

Small traders take this mined substance and sell it to companies that refine the rocks and process the cobalt for manufacturing. Congo Dongfang Mining International is one of the biggest firms in this category.

The Chinese firm is owned by Huayou Cobalt, which sells a large portion of its cobalt products to battery manufacturers.

Related: Fairphone wants to put an end to blood gadgets

Apple said in the report that it was "currently evaluating dozens of different materials, including cobalt, in order to identify labor and environmental risks."

Microsoft was "unable to say 'with absolute assurance' whether or not cobalt in its products originates in Katanga in the DRC" -- a province with a high number of mines.

Samsung also said it was looking into supply chain relationships.

Companies like Apple (AAPL), Microsoft (MSFT) and Samsung already publish lists of their top suppliers, as well as criteria for selection. But Amnesty International feels that governments and private companies can do more.

Huayou Cobalt, the company that prepares the mineral for production, has a huge responsibility too.

"It should be able to identify where it is mined, by whom and under what conditions," said Amnesty.

Huayou said in its response that it "has not been aware that any of our legitimate suppliers has hired child labour in their mining sites."