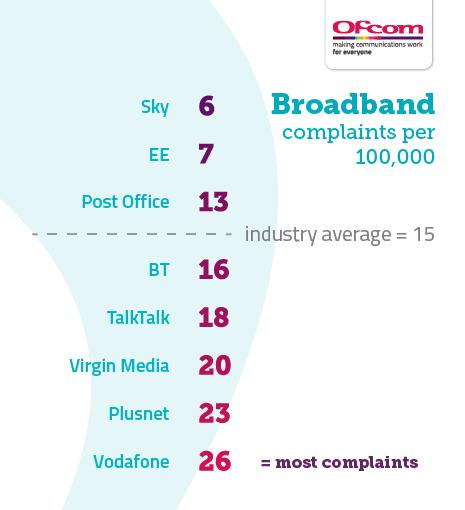 Ofcom has today published their latest Q3 2021 (calendar) consumer complaints study, which identified both TalkTalk and Shell Energy as the providers that attracted the most gripes for fixed broadband services, while TalkTalk also took flak for landline phone services and iD Mobile came top for Mobile moans.

As usual, this report only covers complaints that the regulator itself has received and not those sent directly to either an ISP, the ISPA or one of the two Alternative Dispute Resolution (ADR) complaints handlers – Ombudsman Services or CISAS. Ofcom doesn’t deal with individual complaints, but they do monitor them and can take action if enough people raise a concern.

NOTE: Ofcom received c.96,051 calls and items of correspondence directly from consumers in 2020/21.

Overall, the total volume of complaints for fixed broadband, landline, mobile and pay TV services decreased during the quarter. The report also lists the level of consumer satisfaction with communications services as 77% for landline phone, 80% for broadband and 90% for mobile, but this is based on old data from 2020.

Otherwise, the results below reflect a proportion of residential subscribers (i.e. the total number of quarterly complaints per 100,000 customers per provider), which makes it easier to compare providers in a market where ISPs can vary significantly in size. But sadly, the study only covers feedback from the largest ISPs (i.e. those with a market share of at least 1.5%) due to limited data.

We should add that Ofcom also tracked just 10 complaints about BT’s provision of the 10Mbps+ broadband Universal Service Obligation (USO) during the quarter (down from 13 in Q2 2021 and 46 in Q3 2020), although the separate nature of this service means that they haven’t included this figure into their totals below.

TalkTalk and Shell Energy jointly generated the highest volume of fixed broadband complaints in Q3 2021, with both suffering the most from gripes about faults, service and provisioning issues (33% of TalkTalk’s complaints and 39% for Shell). At the other end of the scale, both EE and Sky Broadband continued to attract the lowest volume of complaints from consumers and deserve some praise.

TalkTalk also attracted the most gripes for landline phone services, with their main complaint drivers being faults, service and provisioning issues (30%); complaints handling (25%); and billing, pricing and charges (22%). Meanwhile, Sky Broadband and EE continued to attract the fewest complaints.

One of the market’s cheapest mobile operators, iD Mobile, has this quarter also risen to be one of the most complained about due to gripes related to complaints handling (27%); changing provider (27%); and billing, pricing and charges (19%). But in fairness, most of the mobile operators are fairly close together on this scale, although EE and Tesco Mobile both received the fewest gripes.

Customers of Virgin Media’s Pay TV service continued to generate the most complaints, with the main complaint drivers being related to complaints handling (30%); billing, pricing and charges (29%); and faults, service and provisioning issues (23%). By comparison, Sky TV continued to enjoy a favourable position by attracting the least gripes from their customers, but this may change for the next report as that will reflect early adoption of Sky Glass (a bit of a rocky launch).

We’ve had a few industry comments on this article.