The Huawei P50 Pro smartphone was released earlier this year, with an impressive array of cameras, a Snapdragon 888 chipset, and the company’s HarmonyOS Android fork. Huawei just released teaser images this week of a foldable version, the P50 Pocket, and a full announcement is expected on December 23. However, we won’t have to wait that long to see a full view of the phone, thanks to a promotional photo shoot.

The Weibo account for Harper’s Bazaar (a fashion magazine) published a photo shoot on its Weibo social media account this Wednesday (via PhoneArena), featuring Chinese actress Guan Xiaotong. The post appears to be a sponsored advertisement for Huawei, but it shows off more of the phone than Huawei itself did in its teaser announcement. 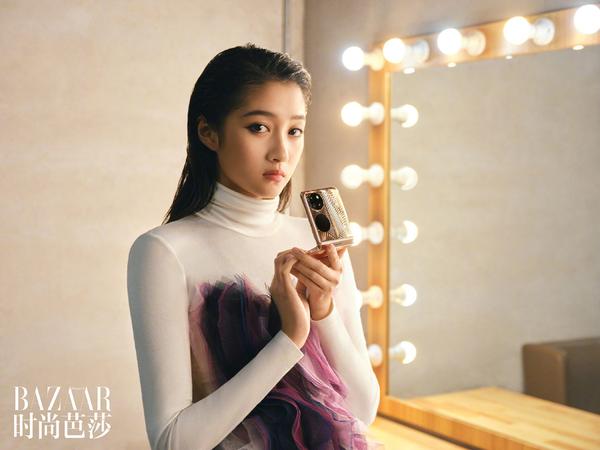 While the original teaser images showed the corners of a white P50 Pocket, the version seen in the photo shoot has a golden finish. The images also reveal the rear camera array and exterior display, both of which are arranged in circles. There’s also a photo of the exterior screen being used as a preview for the camera, similar to the Galaxy Z Flip 3 and Moto Razr.

Now we know what the Huawei P50 Pocket looks like, but its hardware is still a mystery. Display analyst Ross Young claims the foldable screen measures 6.85 inches diagonally, while the circular exterior display is 1 inch across. The normal (non-folding) Huawei P50 Pro has a 6.5-inch 90Hz OLED screen, a Snapdragon 888 chipset, 8GB RAM, 128 or 256GB storage, four rear cameras, a 4,100mAh battery, 66W fast wired charging, and an IP68 rating.

Huawei will likely announce all the details on December 23, 2021, according to the initial teaser. The P50 Pocket will join the rapidly-expanding club of folding phones, including the recently-announced compact Oppo Find N, Samsung’s Galaxy Z Fold and Z Flip devices, the Motorola Razr, Xiaomi Mi Mix Fold, and others. Honor is also reportedly working on its own foldable phone, following its split from Huawei earlier this year.