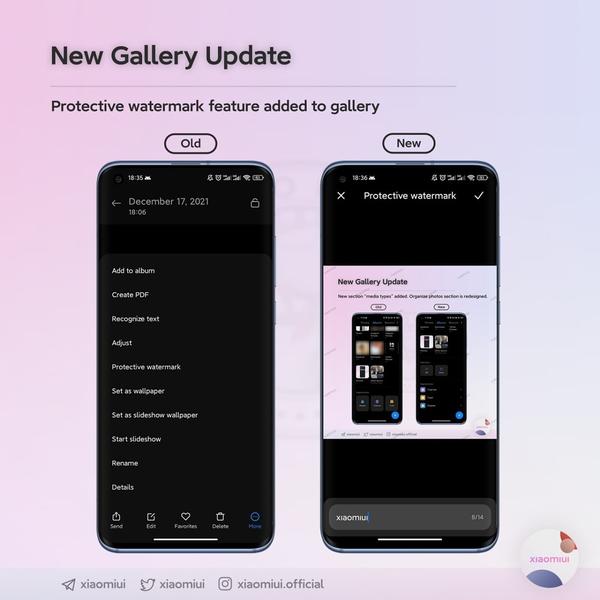 MIUI is one of the most feature-rich custom Android skin out there, offering plenty of customizations and personalization that you won’t find in the vanilla version of Android. As with other custom skins, MIUI bundles a lot of first-party apps that rival Google’s offerings. It has its own app store to compete with the Google Play Store. Meanwhile, its Gallery app goes head to head against the Google Photos app. And with the new update, the Gallery app is getting even better.

As spotted by Telegram channel xiaomiui, the Gallery app has received a new update, v3.4.3.1, bringing several new features and enhancements. Most notably, the latest update adds a new protective watermark feature to protect your identity and sensitive document. To use it, simply open the image that you want to protect, and tap on the “More” button in the bottom right corner, and select “Protective watermark” from the menu.

The new update also adds a media search tool to help you quickly locate photos, the ability to pinch to zoom to customize the look of the photo grid, optimized photo list layout, and more.

The complete update changelog for the app is as follows:

Note that Xiaomi hasn’t officially started rolling out the new Gallery app to users just yet. The APK was pulled from a Chinese build of MIUI. However, you can grab the latest APK from APKMirror and sideload it on your Redmi or Mi phone running Android 8.0 and above. I sideloaded the app on my mom’s Redmi Note 8 running MIUI 11 Global and everything seems to be working fine except the map view feature.