Xiaomi introduced three new phones in China today - Redmi Note 11 Pro and Redmi Note 11 Pro+ and the more affordable vanilla Redmi Note 11. The two Pro devices are identical aside from one key difference - the Plus variant brings 120W fast charging, while the regular Pro has a bigger battery.

These two phones are the same on the outside. The front panel is a 6.67” AMOLED screen with 120Hz refresh rate and 360Hz touch sampling rate, and features a particularly small selfie camera punch-hole at just 2.96mm in diameter.

The most impressive feature of the Redmi Note 11 Pro+ is its 120W fast charging that tops the 4,500 mAh battery in about 15 minutes. To prove that, Xiaomi had a performer on stage hold his breath for 15 minutes and 5 seconds while a demo unit was charging.

Going for the non-Plus phone would decrease the charging rate to “just” 67W, which is still tremendously fast,and you'd be getting a larger 5,160mAh battery.

The huge camera island on the back has only three active snappers: a 108MP main with Samsung HM2 sensor, borrowed from the predecessor Redmi Note 10 Pro, an 8MP ultrawide cam with 120-degree FoV, and a 2MP telemacro camera. The front-facing camera has a 16MP sensor.

The phone has a 3.5mm audio jack and JBL-tuned stereo speakers. Two 0.65 cubic mm audio chambers on the two sides of the phone aim to enhance sound. 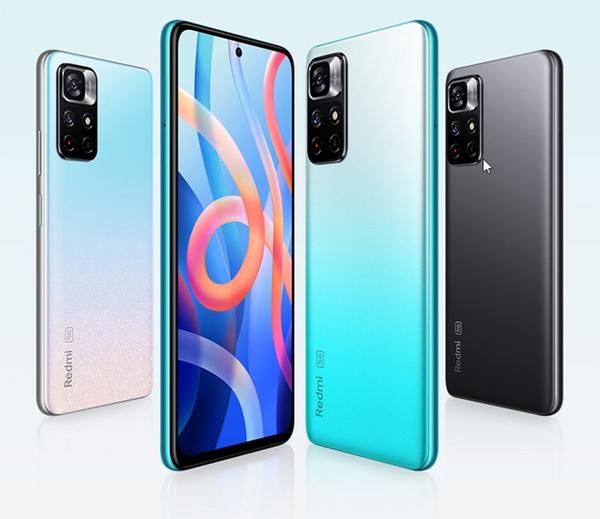 The two Redmi Note 11 Pro phones have a dual-SIM slot but no room for microSD. They run Android 11 with MIUI 12.5 on top.

At the front, we’re looking at a 6.6” LCD with Full HD+ resolution and 90Hz refresh rate. The back has the same huge island but sadly comes with only two cameras - 50MP main unit and 8MP ultrawide camera.At least the Redmi Note 11 retained the 16MP selfie shooter.

There is a downgrade in the battery department as well. The vanilla Note 11 has 33W fast charging for the 5,000mAh battery, which should charge from 0 to 100% in 62 minutes, according to Redmi. The fingerprint scanner made its way on the side, doubling as a power key.

Here, we also see a 3.5 mm audio jack, stereo speakers and an IR sensor, as well as Android 11 with MIUI 12.5 on top. And just like the Pro phones, the Redmi Note 11 does not have a micro SD slot.

The Redmi Note 11 is going to be available in Gradient, Black, and Mint Blue colors and start from CNY1,199 ($187). The first flash sale will take place on Monday, November 1.

The Redmi Note 11 Pro+ will be available on the same day as its non-Plus sibling, but it starts from CNY1,999 ($310) and skips on the gradient paint job.

Instead the Redmi Note 11 Pro+ will have a Yibo Design option that is Green with fancy stripes and has a 3D effect of the Redmi logo, painted on the glass back. It costs CNY2,699 ($420) and will launch on November 11, the Chinese shopping holiday known as Singles’ Day.