The end of 3G is coming for every carrier, but the way AT&T is handling their 3G shutdown is rubbing some people the wrong way.

AT&T has chosen to go with a specific allowlist of devices that can continue to connect to their network following the 3G shutdown. This effectively means that any device being used on AT&T’s network must be pre-approved. Unfortunately, even devices that are fully compatible with AT&T’s LTE network are being shut out because they aren’t on that list.

Customers across the web are complaining about their fully functional devices being shut out or having difficulties due to the whitelist. AT&T is automatically suspending people’s lines if the device on that line isn’t on the allowlist.

One user with an unlocked Galaxy S8+ was told they were being shipped a new phone without warning, likely via an SMS like the one shown here, only to never receive the device. 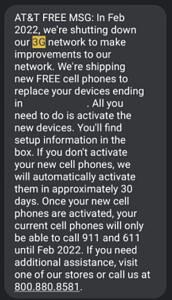 Support told them their device is fine and to not worry. However, their Galaxy S8+ eventually stopped working, and their account showed a new device had taken its place. AT&T support allegedly refused to offer them an equivalent replacement device at the time without the user paying for it. Another user says AT&T randomly shipped them a device they don’t want (likely a RADIANT Core) to an old address to replace their one-year-old fully functional device.

One user contacted us via email to say that they had their own Sony Xperia XZ Compact suddenly lose service. According to them, AT&T had sent the plan’s account holder a RADIANT Core for that line. They then had to use an alternate phone to contact AT&T, who told them their old device only supported 3G. A store rep later told them that AT&T is not supporting any unlocked phones at all, which isn’t accurate as far as we can tell. Overall confusion among customers and employees only further muddies the water when it comes to AT&T’s handling of their 3G shutdown.

Verizon and T-Mobile are also sunsetting their 3G networks. They, however, are not using such a strict allowlist system. Both carriers simply require devices to be compatible with their respective Voice over LTE technology, which most devices do. AT&T seems to be the only carrier that is actively rejecting compatible devices.

If you’re unsure if your device will continue working as expected, check out our post here containing AT&T’s allowlist.