www.androidpolice.com Assistant routines can now be tied to your alarm – no, not that alarm, the other alarm

www.androidpolice.com Assistant routines can now be tied to your alarm – no, not that alarm, the other alarm

Would you be surprised if I told you Google — and specifically Google Assistant — is rolling out another way of doing something that's already been available? Because of course redundancy makes more sense than a streamlined experience. The feature in question is the ability to trigger an Assistant routine after an alarm. See? I knew you were going to say this isn't new. Except that that was the Clock app's alarm, while this is the Assistant's alarm.

The feature was actually announced yesterday along with a bunch of other family-oriented improvements, and is already starting to roll out to users. You'll notice it if you try to add a new routine or if you try to edit one of the default routines like Good Morning. If you check the different "starter" triggers, you'll find the usual voice command and time, the recent sunrise/sunset additions, plus a new fourth option: Dismiss an alarm.

Choosing that fourth option doesn't create a new alarm, but lets you set the confined parameters within which any dismissed alarm on your speaker or display triggers that particular routine.

So you can choose a specific timespan during the day (you can't pick specific days of the week, though) and which speakers and displays it applies to. After that, edit the actions or your routine as usual and save it. 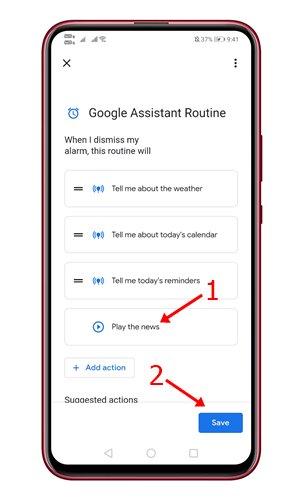 From then on, if you set up an alarm that's meant to ring on a chosen speaker during the preset time, and if you dismiss that alarm when it starts ringing, the routine will be triggered automatically.

As you can see, this is the equivalent of the Clock app alarm routine trigger, except it works with the alarms you're setting up on your speakers. Since I personally rarely use the on-phone alarms and go for the Home Mini one instead, I prefer this solution, but as always, I wish there was a central way to manage all of this. It doesn't make sense that routines can be triggered in different ways and one of them is controlled in the Home and Assistant apps, while the other is tucked away in the Clock app.

The notification shade gets busier

Rita was a Managing Editor at Android Police. Once upon a time, she was a pharmacist as well. Her love story with Android started in 2009 and has been going stronger with every update, device, tip, app, and game. She lives in France, speaks three languages and a half, and watches a lot of TV series.