www.androidpolice.com 9 great One UI features you should be using on your Galaxy device

www.androidpolice.com 9 great One UI features you should be using on your Galaxy device 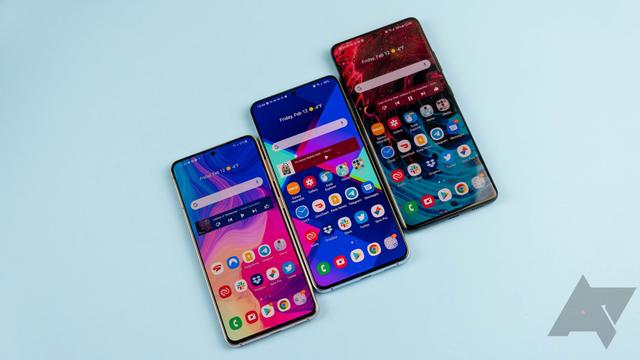 Samsung devices, which are some of the best Android phones, have always been some of the most feature-packed devices you can buy, offering almost endless customization. With so much to see and do, some of the most useful elements of One UI have likely slipped past people's notice. To rectify that, let's look at nine features you should be using on your Galaxy device.

Starting a list of features you should use with Bixby might seem strange, but the truth is that while the digital assistant is almost useless, the separate Routines app is exceptional. Here you can create any number of automation that will perform selected actions exactly when you need them. Routines can be triggered when you connect to certain Wi-Fi or Bluetooth devices, when your Galaxy Watch detects a certain workout, when your battery drops below a certain percentage, and more. The actions performed are even more numerous than the triggers, letting you control almost all system settings right down to changing your lockscreen shortcuts, as well as changing the equalizer on your Galaxy Buds.

I use three routines most regularly: Slow charging, Migraine, and Cinema. Between the hours of 1:30 AM and 7 AM, my Galaxy S21 Ultra disables fast wireless and wired charging to preserve battery health. Once the routine ends, fast charging kicks in again and tops the phone up for when I wake up. Migraine has a manual trigger on my home screen, and when I turn it on, my display dims, sounds are switched off, and the blue light filter turns on. Finally, we have Cinema, which is fairly self-explanatory. When I use Theater mode on my Galaxy Watch4, it syncs with my Galaxy S21 to ensure I'm not disturbed.

Bixby Routines has so much to offer, and it's a shame that the reputation of the voice assistant might make a lot of users overlook Routines. As many triggers and actions as the app already has, Samsung is still testing more, so Bixby Routines should get even more useful over time.

Bixby Routines are available on One UI 1.0 and above, but more recent features will require newer OS versions.

Good Lock is one of my favorite parts of the Samsung experience, and it offers a multitude of useful tweaks to make your phone work better. One of the most useful is Bluetooth Metronome, which lets you eliminate bad lip sync when watching a video with wireless earbuds. If you're hearing someone speak before you see their lips move, you can add a delay to the audio to make it match up. If the opposite is true, you can add a delay to the video instead. This became invaluable when I tested One UI 4 on my Z Fold3, as the first beta had latency issues with my Galaxy Buds Pro. It took less than a minute before I had everything sorted.

To use Bluetooth Metronome, you'll need to download Good Lock and the SoundAssistant module. In there, you'll see the feature listed under "external audio devices." Once it's enabled, you can add a shortcut to your volume panel for quick access.

Bluetooth Metronome is available on One UI 3.0 and above.

As well as opening two apps side-by-side like every other Android device, Samsung also lets you open them in free-form windows that can be dragged around, resized, and minimized. They're similar to Google's chat bubbles, only far more useful and reliable. Unlike bubbles, pop-up windows work with every app that supports multi-window, not just messaging apps. There are many use cases for this, and one of them is watching a YouTube video while using other apps without paying for YouTube Premium. Open YouTube in pop-up mode, resize the window, play the desired video, and tap full-screen. When you do so, YouTube will play the video full-screen within the confines of the window.

Pop-up windows are available on One UI 1.0 and above.

When Google released Android 6.0 Marshmallow, one of my favorite features was the System UI Tuner which, as the name suggests, allowed you to modify parts of your system. What I used most was the ability to customize my status bar by hiding icons I didn't want to see. Sadly Google removed the UI Tuner in subsequent releases of Android, but if you're a Samsung user, Good Lock is ready to fill the void.

Good Lock replicates many things the old UI Tuner was capable of, but I want to focus on the status bar. I always keep my phone on vibrate and connected to a smartwatch. I don't need the status bar icons to tell me that, so switching them off makes everything look cleaner. If you're in the US, some Samsung phones display an indicator to say NFC is switched on, which is useless if you ask me. Thankfully, that too can be disabled. To try this for yourself, download QuickStar in the Good Lock app, and look for the "visibility of indicator icons" menu.

QuickStar is available on One UI 1.0 and above, but more recent features will require newer OS versions.

Keep screen on while viewing

Google's Pixel 4 came with a feature called Screen Attention, which keeps the screen on while you are looking at it, overriding the typical timeout limit. While this was a first for Pixels, Samsung had been doing the same thing since 2012 when it debuted Smart Stay on the Galaxy S3, before eventually rolling the feature out to older phones as well. That was nine years ago, so it shouldn't be surprising that many people forget it exists, especially as it's been renamed and buried in a sub-menu. Head into the Settings app, then Advanced Features, Motions, and Gestures, and enable "Keep screen on while viewing." It's not as catchy as Smart Stay, but it does the same thing and works better than ever before.

Keep screen on while viewing is available on One UI 1.0 and above.

I have a lot of apps on my phone, but when I'm sharing something, it's typically with a small selection. Having to scroll through a long list of apps to find what I want each time can be a bore, so adding favorites in One UI is perfect. Open your share sheet, and tap the pencil icon in the top right corner. From here, you can pin your favorite apps to the top. With that done, the next time you share something, your chosen favorites will appear above all the others for quicker access.

Another tweak you can make is to Direct Share, which is supposed to guess which contact you'd like to share something with and which app you'd like to use to do so. In my experience, this has never worked that well regardless of how much effort Google put into improving it. To make it more useful, download the Home Up module in Good Lock, and go into the share manager menu. From here, you can choose which conversations or app shortcuts will appear.

Editing your share sheet is possible in One UI 2.0 through the Home Up Good Lock module and from the sheet itself in One UI 4.

Pop-up notifications take up a lot of room at the top of your screen, which can be particularly annoying if you're trying to watch something. You could switch them off entirely, but Samsung offers a middle-ground option. Go into your Settings menu and tap on Notifications. Here you can choose between the default detailed notifications or the more compact brief notifications. The advantage of using the brief option is that you can expand them to show more details if you want to read more of the incoming message.

Changing the size of heads-up notifications is available in One UI 1.0 and above. In older versions, it could be accessed in the Edge Lighting menu.

Lock screen shortcuts are something you either never use or use all the time. I fall into the latter category, thanks to One UI letting me choose what those shortcuts are. From the Settings app, tap on Lock screen and then Shortcuts. Calculator, camera, do not disturb, torch, and voice recorder can all be used without having to unlock your phone, or you can use any other installed app if you don't mind unlocking your device when the shortcut is used.

I have mine set to toggle the torch and do not disturb. Being able to quickly silence my phone at night while it sits on the charging pad in one quick swipe is incredibly convenient, as is having quick access to a torch whenever I need one.

Changing your lock screen shortcuts is available on One UI 2.5 and above.

Google removed lock screen widgets in Android 5 Lollipop, but Samsung decided to bring them back in One UI 3 based on Android 11. Tap on your lock screen clock, and you'll be greeted with a list of widgets. To change which are shown, scroll to the bottom of the list and press the settings button. Sadly, you can't use any third-party widgets, and you're stuck with what Samsung offers. You can choose from music, weather, calendar events for the day, your next alarm, digital wellbeing, your favorite Bixby Routines, and the voice recorder.

I hoped Samsung would add more options in One UI 4, but that sadly wasn't the case. It might not be as versatile as what we had in the Android KitKat days, but it's better than nothing, and being able to look at my calendar for the day without unlocking my phone has proven useful.

Lockscreen widgets are available on One UI 3.0 and above.

Putting this list together has made me realize just how much One UI has to offer, and it reminded me why it's one of my favorite flavors of Android. Although my S21 Ultra is running One UI 4 based on Android 12, all of the features I covered here are available in One UI 3 and Android 11 as well.