As the Galaxy S22 family is one of the most hotly-anticipated launches of 2022, it has been the subject of attention for many prying eyes – after so, so many leaks, there are only a few secrets left. The official launchis a few days away, but we already have a pretty clear picture of what to expect. In case you tuned out all the leaks, here is a summary.

Long story short, the Galaxy S22 and Galaxy S22+ will stick to last year’s design (with some improvements) and will focus on upgrading the camera hardware. The Galaxy S22+ Ultra will keep essentially the same camera hardware as last year, but will undergo an almost complete redesign of the exterior that was inspired by the now discontinued Note series. A word of caution – while different leaks have corroborated the various details, there is still a chance that a few things described here are wrong.

If you don’t have time to read through all the leaks, check out the video below – Angie will walk you through everything we’ve heard about the S22 series, both official and unofficial.

The Ultra will have a rectangular silhouette and Samsung has found a way to remove the chunky camera hump – the back will be mostly flat with only the camera lenses sticking out. As far as we can tell, the cameras themselves will use the same sensors as last year (plus a new Super Clear Glass lens), though with improved image processing. The phone will be a tad wider and will finish the work on integrating the S Pen that was started last year with the S21 Ultra. The stylus will have a place inside the phone itself, making this a Galaxy Note in all but name.

Phone and screen sizes of the Galaxy S22 series 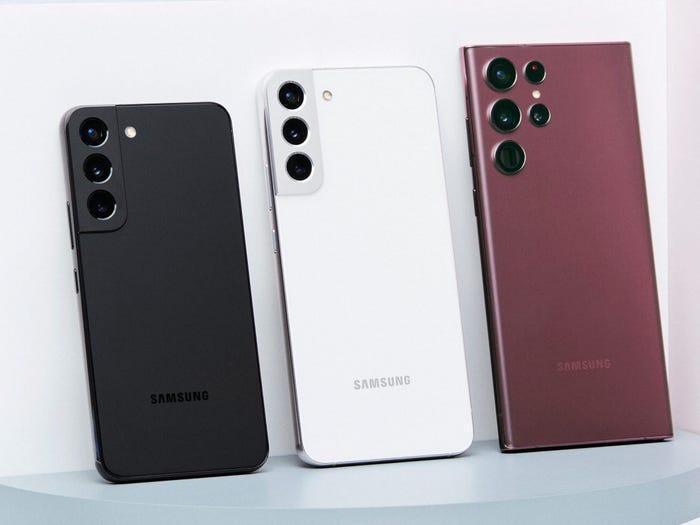 The Galaxy S22 and S22+ will look mostly the same, though the vanilla model is dropping from a 6.2” screen to a 6.1” diagonal. This will make it a bit more compact and its battery a bit smaller, plus it will be the only one stuck at 25W maximum charging power – the other two go up to 45W. At least the back panel is going backto glass. Also, despite looking the same, the camera bump will house new hardware – 50 MP sensor (GN5) in the main, 12 MP in the ultra wide and a proper telephoto lens with 3x optical magnification and a 10 MP sensor.

The biggest unknowns are the chipsets - we know that they will be a Snapdragon 8 Gen 1 and an Exynos 2200, the real question is about how they will perform. Early feedback on the Snapdragon is mixed and Samsung is undertaking a massive change by switching from the Mali GPUs it has been using for years to one based on AMD's RDNA 2 with hardware raytracing support.

Finally, let’s talk about the pricing. In Europe, the phones will cost the same as last year. US prices are up $100 across the board. Note that we’re still not sure what the pre-order goodies will be, but expect some freebies and trade-in deals.

Speaking of pre-orders, those usually last two weeks before open sales begin, however, this year the schedule may be pushed back – rumor has it that only the Galaxy S22 Ultra will launch on February 25 and that the S22 and S22+ will be pushed back to March 11.

how to change picture on samsung phone