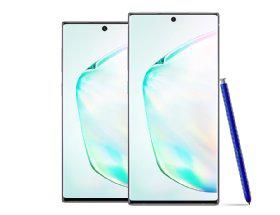 The 6.3-inch Galaxy Note10 and 6.8-inch Note10+ both feature Cinematic Infinity Displays with near-invisible bezels and just a hole-punch-size front-facing camera, smaller than the Note9's, taking advantage of screen real estate. The Note10 is Samsung's narrowest Note, while the Note10+ touts Samsung's biggest screen yet; both form factors are less than 8 mm thick.

The Note's AMOLED (Active-Matrix Organic Light-Emitting Diode) display promises 98% color and brightness uniformity and reduces blue light to minimize eye strain. The screen is also embedded with a fingerprint sensor toward the bottom of the glass to reduce screen design interruptions and the need for buttons -- the Note10 features just two physical buttons.

With the introduction of the Note10, Samsung also extended its DeX capabilities to ensure a more seamless connection with smartphones. DeX, Samsung's software that enables users to use their phone like a PC, previously required a keyboard, mouse and monitor docking station to view mobile content. Now, the Note10 can be connected to a laptop -- PC or Mac -- with a USB-C connection to drag and drop files between devices and use smartphone apps, including access to recent texts and photos.

Unfortunately, this new DeX capability is not compatible with the Galaxy S10. Note10 users can still utilize DeX in its original docking station configuration with a USB-C-to-HDMI cable. In the future, Samsung hopes to incorporate phone call capabilities within the DeX experience.

The Note10 and 10+ feature upgraded cameras and lenses for landscape, portrait and close-up photography in any lighting, but the most impressive camera upgrades concern the Note's video capabilities. This release brings the following:

The Samsung Note10 and Note10+ have 3,500 milliampere hour and 4,300 milliampere hour batteries, respectively, which promise to provide hours of charge from just a few minutes of charging, thanks to Super Fast Charging. Samsung's intelligent battery uses an algorithm to decide how to optimize power for each specific user.

With this release, Samsung also nixed its 3.5 mm headphone port on the Note, as it did with Galaxy A8s, to create a slimmer, lighter form factor. Apple was the first to kill the headphone jack in 2016 with the release of iPhone 7, and prior to this unveiling, the Note10 was rumored to be Samsung's last device that still had the port.

While two form factors were released, Verizon is also offering a 5G version of the Note10+ for a limited time. The 5G model will sell with T-Mobile, AT&T and Sprint at a later date.