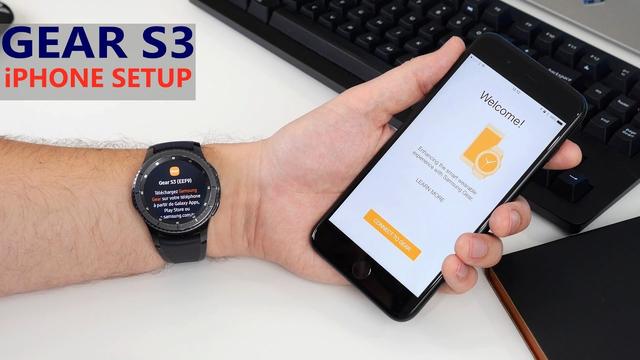 (Pocket-lint) - Samsung's Gear S smartwatches are finally compatible with the iPhone. We take a dive down in to the app and experience to see whether or not the watch is worth taking over Apple's own smartwatch.

Before starting, make sure you have a compatible watch and iPhone. It works with the Gear S3, Gear S2 and Gear Fit2 and with any iPhone from iPhone 5 onward as long as it's running iOS 9.0 or later.

As with virtually any connected peripheral these days, there's an app you need to download to make the Gear S3 watch work with your iPhone. It's called Samsung Gear S and it's available to grab for free from the App Store now.

Once it's downloaded you go through a simple process to connect the watch to the phone. You do this by launching the app, switching on your watch, then searching for the watch through the app.

Your watch should show up on the iPhone's screen. Tap it, then make sure the numbers displayed on both screens match, before confirming the connection. There are then a few more basic steps, mostly involving agreeing to terms and going through to the next screens.

Unlike the Android app, if you want to use the watch to make and receive calls, you also need to go in to the iPhone settings menu to manually connect to the Gear S by Bluetooth. This essentially means there are two Bluetooth connections at once. One for the app, one for calls.

Like the Android version, the app is essential to the smartwatch. You need it to download apps and to view your fitness and activity stats.

The app's first screen is split in to two sections: info and settings. The info side shows you the battery level, gives you access to the S Health part of the app (Samsung's fitness tracking service) and the Suggested apps card, with a link to download new apps and watch faces.

While these functions all work, they seem limited compared to their Android counterpart.

Because of Apple's strict App Store rules about not being able to sell apps/content/downloads from another service through App Store apps, you only get access to the free-to-download watch faces and apps for the Gear S3. That's a pretty limited list of apps.

Likewise, the fitness tracking is limited in that - unlike on the Android version of the app - you can't link your exercises to popular third party services like Strava or Runkeeper. What's more, S Health's breakdowns of running/workout sessions aren't very detailed. You get your distance, pace and time, while the watch also regularly tracks your heart rate. Not much more than that. 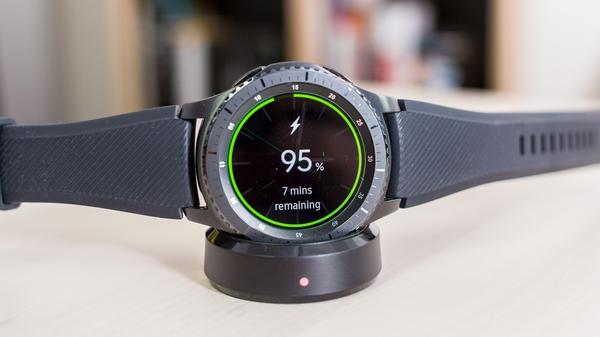 For Apple Health users, you'll be disappointed to read that this data doesn't transfer to the Apple Health app either. You're basically stuck with S Health and - because it doesn't have a web presence - you can't log on to a web version to find ways around sharing the data either.

Still, the S Health service is useful for tracking every day activity and it works the same as it would on an Android smartphone. You have a home screen showing your steps, how many floors you've climbed, how much sleep you got as well as water and caffeine intake and your heart rate.

For the casual every day person not serious about fitness tracking, it works fine. But for those who want more in depth feedback on runs/workouts, the S3 will feel limited, especially with the iPhone.

Notifications on the watch, when connected to the iPhone, look just like those from Android. If you happen to be looking at the watch when an alert comes through, you'll see a blue semi circle appear on screen.

If you're not looking at your watch, it buzzes and if you look at it immediately you'll see the notification on the screen, along with an app icon for the application it's from. Any non-dismissed notifications live to the left of the watch face and are accessed by turning the rotating bezel around the display.

The bad news here, once more, is that you can't interact with notifications the same way you can with an Android phone. You can clear them, dismiss them and block individual apps but that's about it. No voice replies and no quick-reply templates or emojis.

It is worth noting that a lot of these restrictions are because of Apple's tight control over iOS. We discovered a lot of the same restraints when testing Android Wear's compatibility with the iPhone and when we tested the Pebble 2 with an iPhone.

Thankfully, you can take calls using the Gear S's built in microphone and loudspeaker. That was one feature that worked well and was genuinely convenient.

All the details on the next version of the Apple Watch operating system, watchOS 7.

Reliability (or lack of)

Sadly, while all the features are really useful when they're working, we have had some issues with reliability in a couple of vital areas.

On the first day after setting up - despite remaining connected - the watch wouldn't show any new notifications when they came through. Thankfully restarting both devices fixed the issue.

A few days after getting it working again, the watch just disconnected from the iPhone and wouldn't reconnect automatically again until - once more - we had to restart the watch, close the iPhone app and launch it again.

Another problem we encountered was when the watch and app tried to install the S Voice app automatically every day. A notification would come up saying installation had failed, then providing no information - and no way to find the information - as to why it hadn't been successful. Even when trying manually, the progress bar moved at a rate of about one per cent, per minute. Leaving us more than a little frustrated.

Eventually we did get it installed, and the frustration didn't stop. The response to every attempt at a voice command was either "I'm unable to process your request. Try again later", or we'd get a network connection error.

We expect teething issues when connecting a new device to an iPhone, especially when compatibility has only just been implemented. But with 12+ months of development and (presumably) a lot of testing, you'd hope the basics like notifications and connectivity wouldn't be an issue at launch.

Let's hope that future updates bring a more stable and useful experience. On first experience, it's hard to recommend that any iPhone user buy this instead of an Apple Watch in its current state. It's limited and a little unreliable.