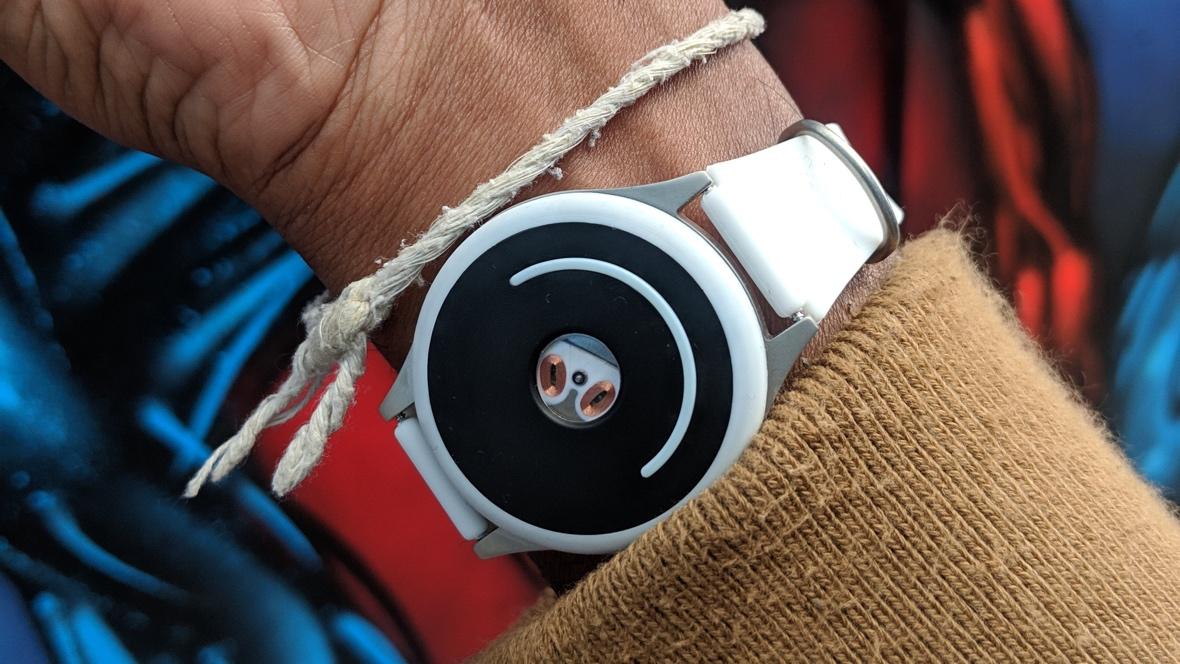 As wearables become more mindful – by which we mean monitoring your mental as well as your physical wellbeing – Doppel is doing things a little differently to the likes of Apple and Fitbit and their smartwatches and fitness trackers.

The unique looking band doesn’t include any fancy sensors like heart rate monitors or accelerometers, instead relying on your body responding to rhythmic vibration patterns to change your mood.

Essential reading:How the biggest names in tech are tackling stress

Like a lot of less traditional wearables, Doppel started out life on Kickstarter in 2015, raising over $100,000 to help make it a reality. But it's taken the UK startup behind it a few years to get it ready for people to try.

Now the $219 wearable is up for grabs, we've finally managed to get our hands on one. I've been spending the last couple of months introducing Doppel into my life to see if it actually works. Here's what I found out.

That odd look and getting it set up

The best way to describe how the Doppel looks is, different, but different in a good way. In essence, this is a wristband with a silicone strap that comes in a straight or a tapered look. But whichever you go for, it shouldn't make a great deal of difference how it sits on your wrist.

That strap holds together the main module where all the vibrating tech is stored. The hole in the middle of the plastic casing leaves part of that vibration mechanic exposed, which also serves to make it look less like a fitness tracker and a little more eye catching.

There is a metal casing (which Doppel says does contain small quantities of nickel), but it's the plastic front with the single curved white line that catches the eye. It's also been slapped with an IP65 water resistant rating, which means wearing it in the rain and washing the dishes should be fine, but swimming is a no-no.

As wristbands go, it definitely falls in the stylish pile. The black and white colour combo and light, streamlined design mean you can wear it comfortably all day and night, and it's a nice departure from the sporty bands and watches that we're usually having to strap on.

The Doppel works with Android smartphones and iPhones so I decided to try it out with both. The former (I used a Pixel 2 XL) posed a lot of connectivity issues. The pairing and unpairing or even locating the wearable was a constant issue with the first Android phone I used. Moving to a Huawei Pro 20 seemed to do the trick of improving the pairing experience, but the iPhone was a lot more reliable.

Once you’ve got the Doppel app downloaded, you’ll need to pair it to the device. That’s done in one of two ways. The first is to place the device into a quite odd-looking charger. It’s a cradle with two charging points but also two elasticated bands that harness the wearable securely. The problem is that it’s a bit of a pain getting the device in and out of that charger. I can appreciate that a secure fit is important here, but surely there must have been a better solution.

The other pairing option is to use the touch sensitive areas of the band to wake the device up. You can tap on the four sections on the top of the device to wake it up so it can sync. I honestly think I only managed to successfully do this once, so sticking it in the charger was the way to go.

Once you’ve paired the two together, you’re prompted to make a recording of your resting heart rate. This means Doppel can better optimise the rhythms and vibrations based on that resting heart rate so it can be most effective in doing its job.

That’s not done on the device itself, but on your smartphone, by placing your finger over the lens flash on your phone camera. The process, if done in sufficient amount of light, should take a minute or so. The resting heart reading matched what my reliable wrist-based heart rate monitor displayed so I was happy to proceed. 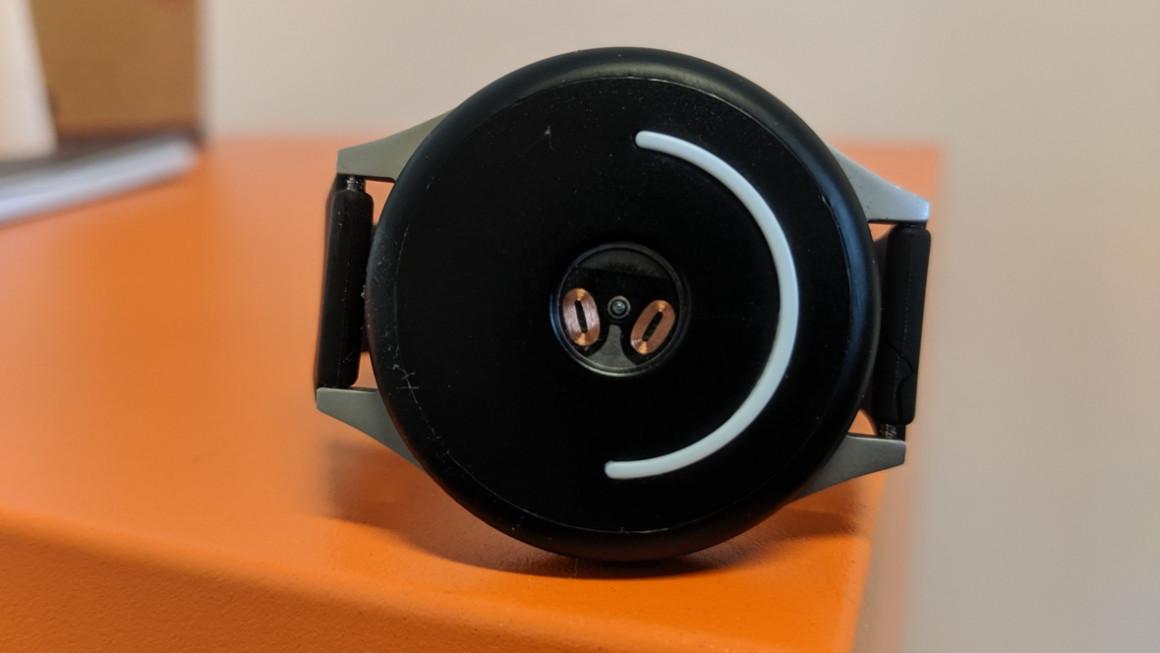 When that’s done, you’re met with a screen that displays the battery life of the device, a toggle to turn the device on, the ability to control the intensity of the vibrations and whether those vibrations are high or low.

It’s the My Rhythms tab that you need to pay attention to, because that’s where you can control the types of rhythms depending on how you want to feel. So at the moment there are four programs: 'Alert and focused', 'Calm and focused', 'Calm and relaxed' and 'Energised and alert'. These programs can be edited to give you better control on how strong and frequent those vibrating rhythms are.

The science behind it all

Before getting into how well it works, we're going to need to break down just how Doppel believes its wearable can be effective in changing moods.

The concept was apparently inspired by research into psychology and neuroscience, the latter of which we are starting to hear a lot more about in the wearable space. The idea is that we respond naturally to different rhythms, so the wristband creates this 'silent' vibration designed to replicate the sound of a heartbeat.

It's not about the device matching the rhythm of your heartbeat, but more about how our brains respond to a rhythm that they are familiar with, subtly reacting to those rhythms to alter your mood. So the idea is that different vibration intensities and speeds have the ability to make us feel more focused and calmer. The reason it takes that resting heart rate reading is so that it can create suitable vibration patterns that are slower than your resting heart rate, which creates a more calming sensation, while faster vibrations than your resting heart rate get you more focused and alert.

Doppel says there is the research to suggest this works, in a similar way to how music might get you in the zone for a workout. Except Doppel wants to do it in much more discreet way.

It's also done its own research, which has been published (and which you can read here), which involved participants wearing it during the anticipation of a public speech. The findings suggested wearing Doppel and tapping into those vibrating rhythms did in fact have a calming effect on the test subjects.

Putting it to the test

I’ve been wearing the Doppel on and off for the past few months. I decided there would be some good scenarios to wear Doppel to see how effective it was. The first was to replace that usual morning cup of coffee. I also tried it when I needed to focus on writing something, and before going to the gym for a workout. I also used it on my commute to help me get into a more focused mindset in the morning and a more relaxed one on the way home. It also went to bed with me to help switch off.

I'll admit I was sceptical of the science as I imagine a lot of people will be. In those first initial attempts of using Doppel, it didn't really do anything for me. The problem was that I was focusing too much on the vibrations being sent out by the wristband and expecting it to somehow make me feel calmer or more alert. But once I turned it on and got on with the task at hand I began to understand what Doppel was all about.

It was most noticeable when I needed to be alert, more so than when I had to relax. When I was sat at my desk in the office or at home, the faster, more intense vibration rhythms were something I seemed to react to positively, similar to how I use music to zone out.

The slower, more relaxing rhythms were most effective on my commute home. I could turn the vibration intensity up, which can be loud at max intensity in a quiet office environment. I actually didn't feel the need to tinker with the vibration settings, but the ability to change intensity should widen the possibility of it working for more people. I didn't really want to believe these small vibrations could work, but the soft, rhythmic nature of them did seem to be having a genuine impact.

But here's the bad stuff. When it worked, it worked well, but I experienced a lot of bugs with Doppel. The gesture-based system also didn't work for me. It meant relying on having the charger nearby pretty much all of the time to wake the device up to sync with the companion smartphone app. Pairing was unreliable, which was made more problematic by the inability to simply turn the device on.

The vibrations may on the whole be pretty silent, but as mentioned, in a small office environment with it turned up to the max you can definitely hear it buzzing. In busier, more public spaces, it’s easier to drown out the vibrating sound when it's full intensity, but in quiet environments, it's wise not going full whack on the intensity if you don’t want to irritate people around you.

In spite of proving it could help alter my mood, it was the strap that eventually killed my Doppel. It started by occasionally falling off. One the first times it happened it was clear the problem lay with the flimsy clasp that holds the strap around your wrist. But then the strap snapped at the removable lugs where it joins to the body on the way to work – sending it flying across a train platform and meaning I couldn't use it again.

I was ready to be sceptic about Doppel and what it promised to do, but after a few months testing it, I started to appreciate how the subtle mechanics and the psychological impact of feeling and sensing those soft vibrations could have a positive effect.

It's just a shame that what holds it all together is not really fit for purpose. The pairing issues and the responsiveness of those gesture controls clearly need work. And then there's that strap. It's definitely a bit too flimsy. I hope Doppel fixes those things, because I think it has something here. It just needs some refinement.