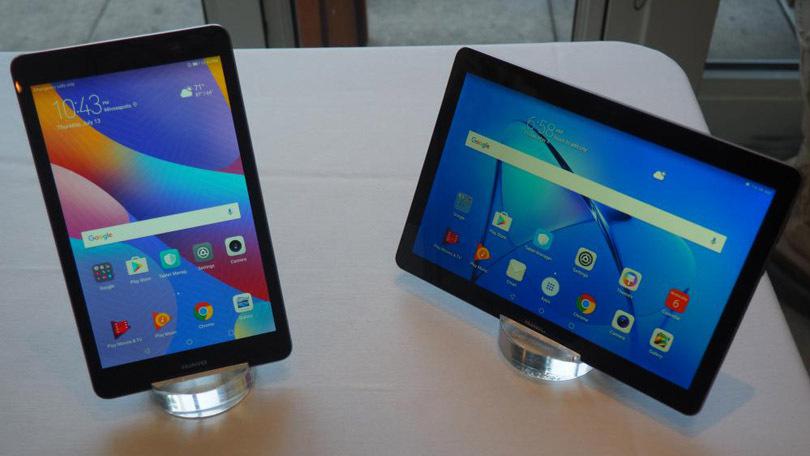 BERLIN—Huawei's foray into the US phone market didn't go as smoothly as the company hoped, but in the world of affordable tablets, the MediaPad line has been around for a while. Today, Huawei Device USA is announcing MediaPad T3 and the more premium MediaPad M3 Lite tablets. Available in 8- and 10-inch models, they'll all be sold for less than $250. I went hands on with all four slates.

The MediaPad M3 Lite is intended to be the slightly more premium brand. It features a sleek aluminum unibody and a sharp 8- or 10-inch 1,920-by-1,200 IPS display. The screens had good viewing angles, bright saturated colors, and were reasonably visible outdoors (albeit a bit reflective).

The 8-inch slate is powered by a 4,800mAh battery while the 10-incher has a sizable 6,600mAh cell. In Huawei's own tests, the slates are capable of 10 hours of video playback, but I'll be subjecting them to PCMag's more intensive battery testing later.

Both have a quad-A53 1.4GHz + Quad-A53 1.1GHz coprocessor, though the chipset is unspecified. You also get 3GB of RAM, 16GB of internal storage, expansion with a microSD card slot, and matching 8-megapixel cameras on the front and back. Both seem to take clear photos in the brightly lit demo area, but we wouldn't expect that to hold up in lower light.

For higher-end features, you have a fingerprint sensor on the front, a rare find on a budget slate. There's also dual-band Wi-Fi and dual or quad stereo speakers powered by Harmon Kardon and tweaked with Huawei's SWS 3.0 Smart Sound management. The audio was robust and room-filling when I demoed them, giving both good potential as media consumption devices.

The MediaPad T3 also has a metal chassis, but it's not quite the seamless unibody feeling of the M3 Lite. The build is a bit bulkier and specs are also pared down. Both the 8- and 10-inch slates have 1,280-by-800 displays with good viewing angles and bright colors, but you're more likely to notice pixels if you take a close look.

Under the hood, both boast an entry-level Qualcomm Snapdragon 425 processor clocked at 1.4GHz, along with 2GB of RAM, 16GB of internal storage, and an expansion slot to add your own card. You get dual-band Wi-Fi, but there's no fingerprint sensor, nor any special Harmon Kardon-powered speakers or audio enhancements. The 5-megapixel rear and 2-megapixel front-facing cameras take passable shots in good lighting, but they won't be as sharp as the higher-resolution sensors on the M3 Lite.

All four slates run Android 7.0 Nougat, with Huawei's EMUI 5.1 skin running on top and changing many visual aspects of the Android experience.

If you're in the market for a budget slate and don't like Amazon's ultra-affordable, but locked-down Fire tablets, the MediaPads seem like good Android alternatives, though we'll be reserving final judgment for our reviews.

Get Our Best Stories!

Sign up for What's New Now to get our top stories delivered to your inbox every morning.