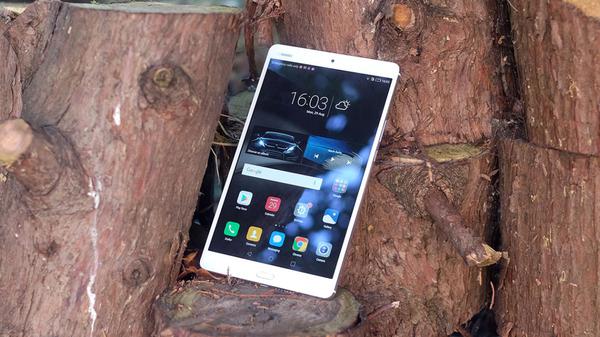 The Huawei MediaPad M3 is a small tablet. It's slim, it's light, and it's handy – and the 4G version can even double as a gigantic phone, as long as you don't mind all your calls coming out at speakerphone volume.

For years the MediaPad series has pootled along in the background, never winning the acclaim, or the sales figures, of a Samsung tablet or an iPad.

This is comfortably the sleekest MediaPad to date; however, by matching an ultra high-res screen with a so-so processor, Huawei has ensured that the M3 can't keep up the demands of the prettiest games that well.

So is this just another also-ran from Huawei's tablet department, or something more impressive that could make potential buyers – and the competition – sit up and take notice?

Build is one of the Huawei MediaPad M3's strongest elements. A very slim, low-flex aluminium casing makes the tablet feel expensive and strong. It's like an iPad mini in this sense, but the shape is a little different – a widescreen aspect ratio makes the M3 a bit less stubby-looking than the 4:3 iPad.

It's a good design, once again proving that 8-inch tablets like this are a great size for most people: big enough to offer a much larger display than any phone, but still light and small enough to take with you everywhere.

The MediaPad M3 is also light enough to hold in one hand, perhaps for reading an article or two on the way to work, to make your work commute that bit more bearable. Our review model weighs just 322g.

The fingerprint scanner is the clue that tells you the MediaPad M3 is a tablet of 2016 rather than, say, 2014. Looking quite a lot like the one used on the Samsung Galaxy S7, this sits below the screen as part of a button.

It's not a clicky button, though, just a touch-sensitive pad. Used while the MediaPad M3 is awake, it's a back button; when the device is asleep, of course, it wakes the little guy up.

This isn't the fastest fingerprint scanner Huawei has ever produced, taking around a second to turn the tablet on from sleep, but it's reliable.

There are just a couple of bits to the Huawei MediaPad M3 that are a little less high-end than similar-looking features you might see in a top-end Huawei phone. For example, the band that holds the rear camera seems to be topped with plastic rather than Gorilla Glass. Crucially, though, the M3 still gives off the whiff of a top-end tablet.

Huawei sent us the 4G version of the MediaPad M3, which has a SIM tray on the bottom edge that also takes a memory card, enabling you to add to the 32GB of built-in storage.

With a SIM inserted you can almost treat the M3 like a phone – the only thing holding you back is the lack of a proper call speaker.

The MediaPad M3 does have good tablet speakers, though. On the top and bottom edges are little 7-pip grilles that let the stereo Harman Kardon drivers sing.

Getting an audio brand involved is no guarantee of good sound quality, but here you get some of the loudest speakers we've heard in a tablet. It's the kind of volume you'd expect from something much larger, like a laptop. The case vibrates a bit at higher volumes, which is hardly surprising.

At the highest volumes the upper mid-range can become a little searing with some material too, but the sound is relatively thick and full; it's impressive stuff for a small, slim tablet. And as the grilles are set to one side, rather than slap-bang in the middle of the top and bottom edges, they're not too easy to block with your hands.

That's your lot in terms of extra hardware, though. There's no IR transmitter, which has featured in some previous Huawei devices – one of these would enable the MediaPad M3 to be used as a universal remote.

The big change compared to the 8-inch MediaPad M2 is that the Huawei MediaPad M3 has a true high-res screen. It's an 8-inch 2560 x 1600-pixel screen, with an IPS LCD panel. The upshot is that pixel density and sharpness are both excellent, and even up close the screen looks sharp.

Brightness is also very good, and there's an ambient light-sensing Auto mode, a feature that's sometimes omitted from tablets. Viewing angles are strong, with minimal brightness loss when you view the screen from an angle.

Huawei has plugged loads of customisation into the MediaPad M3's screen too. First, there are two colour modes. Normal is a classic sRGB mode that looks quite natural, while Vivid mode amps up the colours for a little more energy at the expense of colour accuracy.

As on most of Huawei's phones you can also fiddle with the colour temperature, which changes the character of the M3's screen quite a bit. There's an Eye Comfort mode as well, which, like the iPhone's Night Shift mode, makes the screen more yellow in order to cut down the amount of blue light emitted.

Contrast isn't as good as that of the OLED Samsung Galaxy Tab S2's display, but this is a good screen.