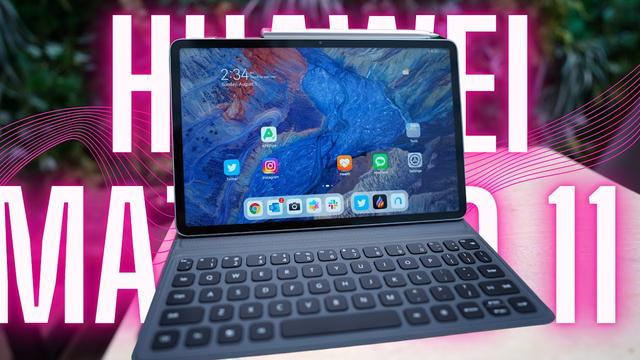 Huawei’s been releasing tablets for a few years now, but the Chinese tech giant’s 2021 update to the line is particularly notable because they are the company’s first mobile computing devices to run HarmonyOS—the software self-developed by Huawei in response to the Google ban put in place by the U.S. government.

I’m just going to get it out of the way here: HarmonyOS works well and brings some welcomed synergy to Huawei’s entire ecosystem, but it’s not radically different from the EMUI (a Huawei-skinned version of Android) that ran on Huawei mobile devices over the past decade. In other words, if you’re thinking HarmonyOS brings an entirely new software experience, you’d be disappointed. Get over that—and you’re treated with good hardware and a good price.

The 2021 MatePad series contains two models, a larger Pro model with a 12.6-inch screen and smaller model with an 11-inch screen. I have tested both, and while the Pro model has a more powerful processor, better speakers, and has a screen that pumps out more vivid colors (OLED technology), I prefer the smaller model and think it’s a better value and better option for most people. This review will focus on the smaller model, named the MatePad 11. If you want to hear my thoughts on the larger model, I reviewed it in video format on YouTube.

The big reason I prefer the MatePad 11 over the larger model is because it has a screen size and aspect ratio that makes more sense to me. Both tablet’s screens use a wide 16:10 aspect ratio, which is suitable for consuming videos and gaming, but not as ideal for word processing tasks or reading large chunks of text like a more square, 3:2 aspect ratio used in iPads and Huawei’s own excellent monitor the MateView.

Because screen dimensions are measured diagonally, this means the wide aspect ratio is even more stretched out on the larger 12.6-inch Pro than the smaller 11-inch. As someone who does a lot of reading and writing, such a wide but short (vertically screen) is not ideal.

The MatePad 11’s screen has a better balance in my opinion. And while it’s an LCD panel instead of the superior OLED used in the Pro model, it supports 120Hz high refresh rate (the Pro model does not). Plus the smaller size makes the MatePad 11 lighter to carry.

The screen has accurate colors, excellent viewing angles and is certified safe for eyes by Rheinland, meaning the screen has low blue light output which can be harmful to eyes after prolonged use.

Bezels around the screen are thin and Huawei had enough sense to put the 8-megapixel selfie camera/webcam in the middle of the top bezel, so the user appears more natural in video calls as they’re looking straight ahead. (iPad’s selfie camera/webcam is placed on the left bezel when used in landscape view, which means in video calls the user appears to others like they’re looking away from the screen).

Flip the tablet around and it’s a rather bland design, with a pill-shaped module housing a single 13-megapixel camera. Both the webcam and main camera are solid, but nothing spectacular. They’re more than fine for basic snap shots or videos. On the side are four speakers that pump out good stereo sound (the Pro model has eight speakers for exceptional sound for those wondering).

There’s 6GB of RAM with either 64GB or 128GB of storage, but the latter can be expanded via MicroSD card. A 7,250 mAh battery with fast charging support sits inside, and while this battery size is not that large, the tablet’s battery life is excellent thanks to Huawei’s best-in-class battery optimization.

Surprisingly, the MatePad 11 has no fingerprint scanner at all. And since the webcam is not a 3D depth sensor, face recognition is not that secure, so if you want real security you must use a password or PIN code that obviously takes longer to register. 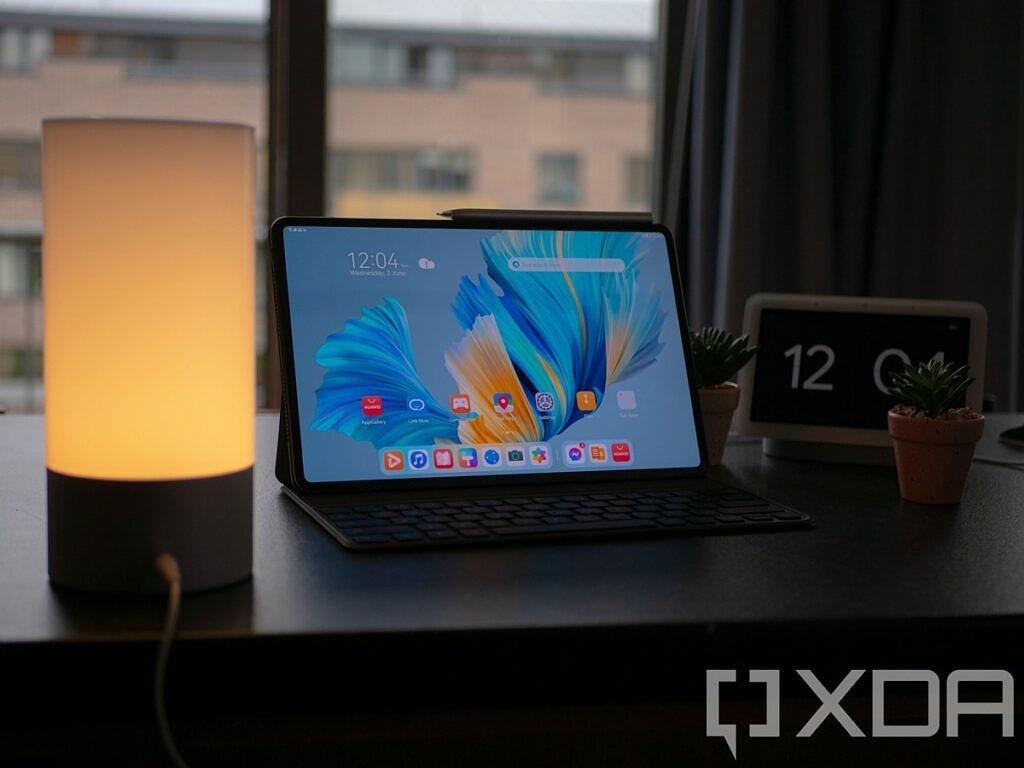 Overall, the MatePad 11 has fine, if not a bit bland, hardware. By itself, the tablet is priced at the equivalent of $380 in China and around the $530 range in Europe (pricing varies by country). However, Huawei is bundling its official keyboard cover case and stylus (named M-Pencil) with that price, while in China, they are separate purchases. It’s still cheaper in China even after these additional purchases, but the gap isn’t as bad as usual.

The keyboard and M-Pencil

If you plan on doing any productivity work with the MatePad 11, the keyboard accessory is almost a must, while the M-Pencil stylus is a nice bonus. The keyboard cover case snaps onto the MatePad 11 magnetically, and once connected the keyboard works without needing setup. The case offers two prop angles for the tablet, and the keyboard itself is excellent, with evenly spaced keys and good key travel. However, there is no trackpad, so you still have to tap the screen to interact with the UI.

The M-Pencil, meanwhile, looks and behaves like the Apple Pencil. It has a clean “seamless” design with no buttons, attaches magnetically to the top of the tablet (where it will be charged wirelessly, too), and has a rubber tip that supports tilt and pressure sensitivity.

Aside from sketching and drawing (which works fine with low latency and good palm rejection software), HarmonyOS has some clever software tricks for the M-Pencil, for example, there’s “Huawei FreeScript,” which converts written words to text with high accuracy. This feature is available on iPadOS and Samsung’s tablet line, too, but Huawei’s, unsurprisingly, does a better job of picking up Chinese handwriting—even the traditional method not used in mainland China.

Huawei’s new HarmonyOS software looks very similar to its previous EMUI software from an aesthetic standpoint. The biggest visual change is the home screen now supports a free grid with widgets of varying sizes allowed anywhere. This is useful to make the MatePad a true productivity machine, as I can pin a larger calendar on the home screen, or a calculator that I can immediately access directly on the home screen without needing to dive into the app first. Samsung’s tablets does not allow this, and iPads will only start to allow this later this fall when iPadOS 15 is released to the general public.

As mentioned earlier, HarmonyOS does bring better connectivity across all of Huawei’s products. For example, the MatePad 11 can connect with a Huawei smartphone easily (either a couple of on-screen taps or, if the user has the keyboard, a tap of the phone on the keyboard’s bottom right side where the NFC pad is located). Once connected, a virtual version of the phone screen shows up on the tablet desktop, allowing for easy drag-and-drop to transfer files, or access to apps on the phone without taking hands off the tablet.

If you own Huawei earbuds, audio will transfer seamlessly between the MatePad 11 or other Huawei devices like laptops or smartphones. And the MatePad 11 can wireless transmit its screen to the MateView monitor.

In other words, if you use several Huawei products, there’s a real benefit to having the MatePad 11, as it’s a good in-between device that sits between a Huawei phone and a Huawei laptop.

The app situation on HarmonyOS

The whole reason HarmonyOS even came to be is because the U.S. government banned Huawei from working with Google, so as expected, Google apps do not work on HarmonyOS. But almost all other major American apps widely used by the world, including Facebook, Instagram, Twitter, all work. Other popular apps such as NetFlix and Spotify work, too.

These apps are not available on Huawei’s app store, but Huawei has a built in search system (Petal Search) that takes you to various locations on the web to download the apps. Petal Search will try its best to take you to the official source (if you search for Facebook, it will take you to Facebook.com where the app can be downloaded directly from the company’s website). But some apps without official download source, Petal Search will suggest a third-party site like APK Mirror. While I, as a phone reviewer experienced with sideloading apps, trust APK Mirror and have used it for years, this may scare the average consumer if they’re suddenly taken to a non-descript site with a bunch of ads.

Long story short, the same obstacles placed by the U.S. government that have derailed the global appeal of Huawei’s smartphones still apply here. I do think not having access to Google apps is not quite as limiting on the MatePad 11 than on a smartphone, because on a tablet with a keyboard case, we tend to use like a laptop, where we usually access Google services via the web browser instead of a dedicated Google app like on a phone.

This workaround works mostly well, by the way. You can access Gmail, YouTube, Google Maps and Google Docs via a web browser inside the MatePad 11. But some services will lack more advanced features.

Ultimately, if your personal or working life revolves around Google services, a Huawei device is not going to be as ideal as using an Android or even an Apple device. And that’s unfortunate, because this software shortcoming is way beyond the control of Huawei’s consumer tech department.

If you’re a fan of Huawei products, or if you don’t necessarily need easy access to Google’s various services, the MatePad 11 is a great value to consider. At around $530 or less, you should be able to get the tablet with a stylus and keyboard case. There’s no such option from Apple or Samsung at that price point.

The 11-inch size and light weight makes the device easy to carry and hold for extended periods of time. And while HarmonyOS doesn’t bring too much new right now, it is a step in the right direction for Huawei. The whole concept of unveiling HarmonyOS, I suspect, is Huawei coming to terms with the fact it may never regain Google access, and thus it’s best if the company moves on and build its own way instead of still offering Android, which is synonymous with Google.